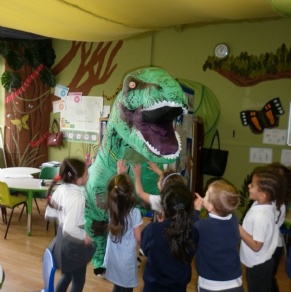 Before half term, during WOW week, the children in Reception had a very exciting visitor!

We had created our own version of the story 'We're going on a bear hunt' and changed it into 'We're going on a dinosaur hunt'. Once we had written our story we decided to act it out around school, following the different parts we had put in our story.

Eventually we came to the jungle cloakroom and you won't believe what we saw!

What an exciting thing to happen! The children were delighted to find a dinosaur and the end of their dinosaur hunt, and we decided that we would make our very own book. The children in each class wrote a section of our story. We then laminated them and turned them in a book which we put into our book corners. Being authors if even more fun than finding dinosaurs.