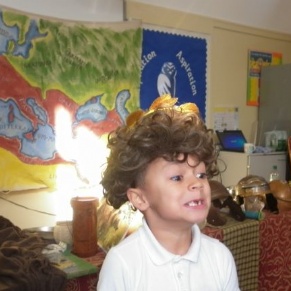 Meet Caligula! This was just one of the interactive ways year 3 learned about the growth of the Roman Empire and Roman Britain on our fantastic Roman Day.  They took part in role play, handled Roman artefacts, were very entertained by our Roman visitor and did it all wearing brilliant Roman helmets they had made themselves.